To help us start the camp with an open heart, we asked Brem to give us a spiritual introduction to holy week. Here is for those who could not be there with us, and those who want, the text from his teaching, and some souvenir pictures.

1. Every year, I am moved to see that Jesus starts his final journey at Bethany. Bethany is a village not too far from Jerusalem. It is his « missionary » base in Juda, the South of Holy Land.

There, he stays in the house of Martha, Maria and Lazarus. We all know these three members of the same family. They are part of his « Barkada ». Mary, the quiet one, the listeners, always listening to Jesus sitting close to him and trying to grasp his teachings. But also Martha, the busy bee, always active, on the move, showing her love for Jesus though service and action. But there is also Lazarus, one of the best friends of Jesus. It seem to me that Jesus felt the need to spend quality time with his friends. Before entering in his Passion, he felt the need to fill his love tank.

Look at what Mary did. She performs the usual Jewish custom : washing hands and feet of the guest, and share some perfume, but she exaggerated this gesture. Spending 300 dinars of perfume, 300 days salary ! This would mean 120.000 Php if a daily salary is 400 php. You can spend that big amount of money in other investments than a bottle of perfume, no ?

But Jesus doesn’t rebuke Mary. He doesn’t accept the criticism of Judas, who pretended that this money should be given to the poor, as he was stealing for himself. No, Jesus says that Mary did the right thing … but he hints that this perfume is intended for his burial. At that moment, nobody understand that Jesus prophesies his dead that will happen so fast. In five days he will be in his tomb.

This is also what we should do for Jesus in these days. Show and express our love for him … and exaggerate it. When you are in love, you are capable of great efforts. I remember kuya Elad, on Mount Tagapo, showing me his village of Tuna, and telling that his father used to climb mount Tagapo to meet his girl-friend in Sapang for a day and then going back to Tuna, all again over Mount Tagapo ! I think that this is what Jesus expects from us : express his love for him. How ? Just ask yourself … question yourself : what is really hard for you ? Giving alms ? A nice donation to the Church who continues the mission of Jesus here on earth (Is there still a donation box for Congo), or is it praying sincerely in the night-adoration, a real vigil ? How will you express your love for Him ?

2. Mother Mary could not prevent Jesus to be arrested and to be nailed on the cross. Every mother wants to preserve her child from pain and suffering. How much Mama May, who new, since the visit of the angel, that Jesus had a special mission, that he was truly God and his conception was done by the Holy Spirit. Well, Mary could not prevent Jesus to be arrested, to be tortured. But she did not run away. She was there, at the foot of the Cross, weeping and mourning, but she did not collapse under the intense suffering. What could she do ? Nothing? NO, she could do something : BE PRESENT, a loving, compassionate, presence.

During the war in Ukraine, a picture has moved me. A soldier entered in a village, and saw a pick-up car with bulled-holes all over the car. The driver was dead, but he discovered the dog hiding under the passenger seat. The dog was there, totally depressed, but he was there, next to his dead owner. Can we do like that ? Can we be there, with Jesus, loving him, hoping and asking that his sacrifice will produce a fruit of life in my life ?

On Saturday Jesus is dead. He is absent … but Mother Mary is still there ! She is always with us.

3. During his last Supper, the Gospel shows us Jesus at the same time in full control of the operations, and so vulnerable. Indeed, He is in full control of the events, as he orders to Judas “to do what he has to do”, and he prophesies to Peter that he will betray his three times. So Jesus is not passive, just a victim of the hatred of the high-priests and the Pharisees, no ! He is in charge, as he says himself : “No one takes my life, I give my life”. Let us contemplate this firm attitude of Jesus. He knows that this is his mission: to suffer and to die for us, as this is the only way to save us. Recently, I spoke with a pregnant mother. She shared with me her fear for the suffering of giving birth, as her baby was already quite big. But at the same time, she was full of joy to see the face of her baby soon. This is only a comparison, but it might help to contemplate the emotions in the heart of Jesus : reluctance and firm decision.

In the story of the last supper, Luke show us three characters, like three different human attitudes: First, there is John, the beloved disciple, who rests on the heart of Jesus, who questions him, who always remains close to Him. Second, there is Peter, the enthusiastic guy, always busy, trying very hard to be the good disciple, but he has a problem. He thinks that he can do it all by himself, that he can rely on his human strength and skills. Somehow, he doesn’t need Jesus, he can handle it all by himself. He is proud when he proclaims: if all will fail, I will always be there for you Jesus. I will be your body-guard. I think that Jesus really had sympathy for Peter, but Peter will need to learn that he cannot do it without God. “Without me, you cannot do anything” says Jesus in the Gospel of John. His triple betrayal will be a painful and humiliating experience. Third, there is Judas the one who was close to Jesus, who had the confidence as he was the treasurer of the group. He had political connections, linked with powerful people. But gradually his heart withdrew from the love of Jesus.

At the Last Supper, Jesus shows love and friendship to Judas. Jesus offers him a morsel. In the Jewish culture, this is a sign of affection, of friendship. It seems that Jesus had a last try to save Judas. But John noticed that right after that, Judas leaves the meal, and notes John “it was dark”. Yes, it was dark in the heart of Judas, ad he had chosen not to accept the love of the Lord.

We can see three disciples, three different attitudes in how being a disciple of Jesus. Sometimes we are Peter, full of enthusiasm, but also inconsistent. Relying on our human capacities, thinking that we do not need Jesus. “Do worry Jesus, I can handle all by myself!”.

Sometimes, we are like Judas, we protect ourselves from Jesus. We do not want Him to be kind and compassionate. We wish he could be more powerful, and impose his views to the mighty people. Why seems God to be so passive ? And gradually, we turn away from Jesus, we pray less and less, we drop our good habit of going to Sunday Mass … and the darkness arises in our heart.

But in other days, we can be like John, the beloved disciple, resting on Jesus heart. Dear San Damiano’s, let us once more decide to be John, to be with Jesus in this Holy Week. Be with him ! … as He is with us !

I will end with a story. Yes, I like stories, do you know ?

In 2011, there was a rich businessman in Japan who was running a sea-food factory in Onagawa. This is a real story, his name is Mitsuru Sato. He hired about twenty Chinese trainees (under OJT). The relationship between Japanese and Chinese was not easy as in WW II, the Japanese imperial army committed a lot of war crimes in China (and the Philippines). One morning, around 9 a.m. an earthquake happened. Quickly, the Japanese owner of the factory took his workers in the truck and drove them higher up in the hills, where they would be safe. Then he went back, at this seashore house, to fetch his family. It is than that the huge wave swallowed him and his family. Mr Mitsuri Sato died altogether with his family on March 11, of 2011. He has prioritized his Chinese workers, putting them in safe grounds … and he died with his family.

The Chinese trainees were really chocked and they went home in China as the factory was totally destroyed by the tsunami. When a year later, the surviving family members of Mr Sato decided to rebuild the factory, they couldn’t find any workers, everybody was afraid the tsunami could happen again. Hearing about this decision, the 20 Chinese trainees decided altogether to volunteer for the jobs, as an act of gratitude for the sacrifice of Mr Sato.

This is what Jesus did for us, in this Holy Week. We were – we are – in danger to be swallowed by spiritual death. We are poisoned by our sins, but Jesus, the Son of God came in the midst of us. Jesus took the risk, he accepted to be swallowed by the fold of death. But He has the victory, he has overcome death. He offers healing and life to everyone of us. Juts like the Chinese trainees, let us chow love and gratitude to our Savior. 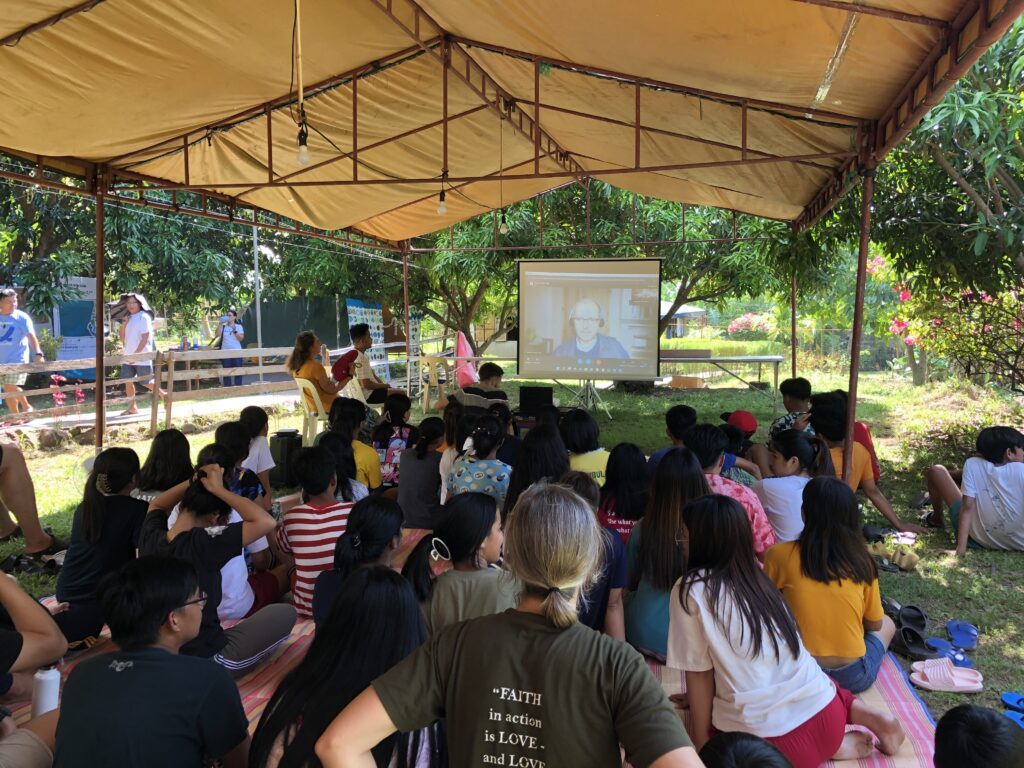 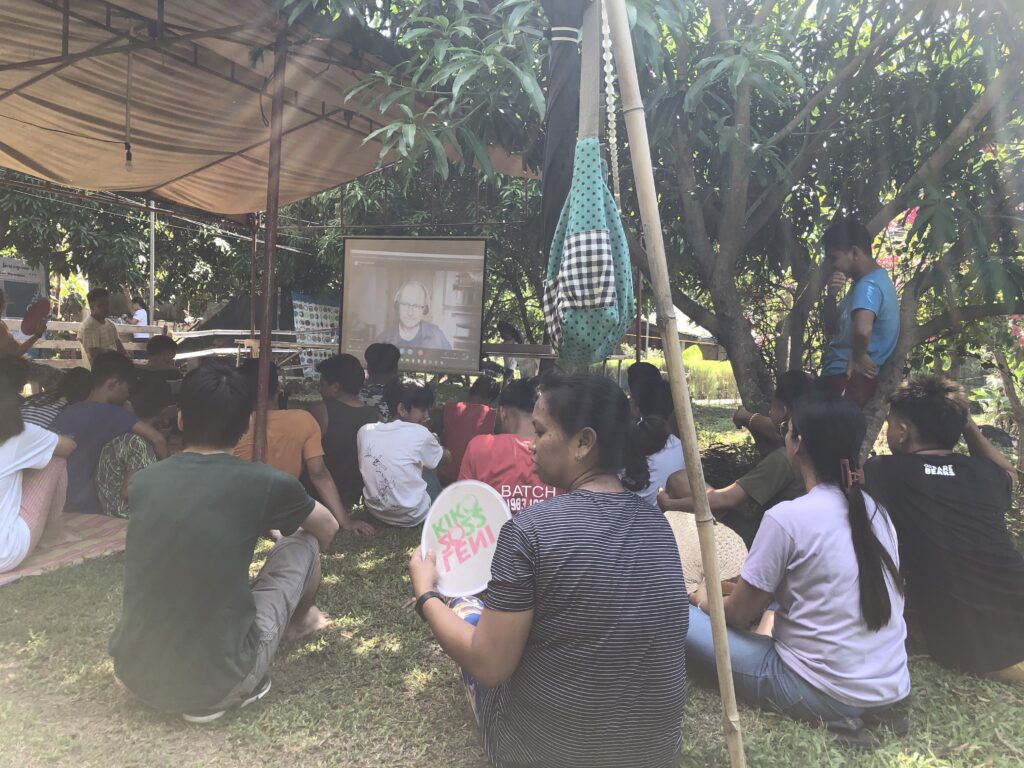 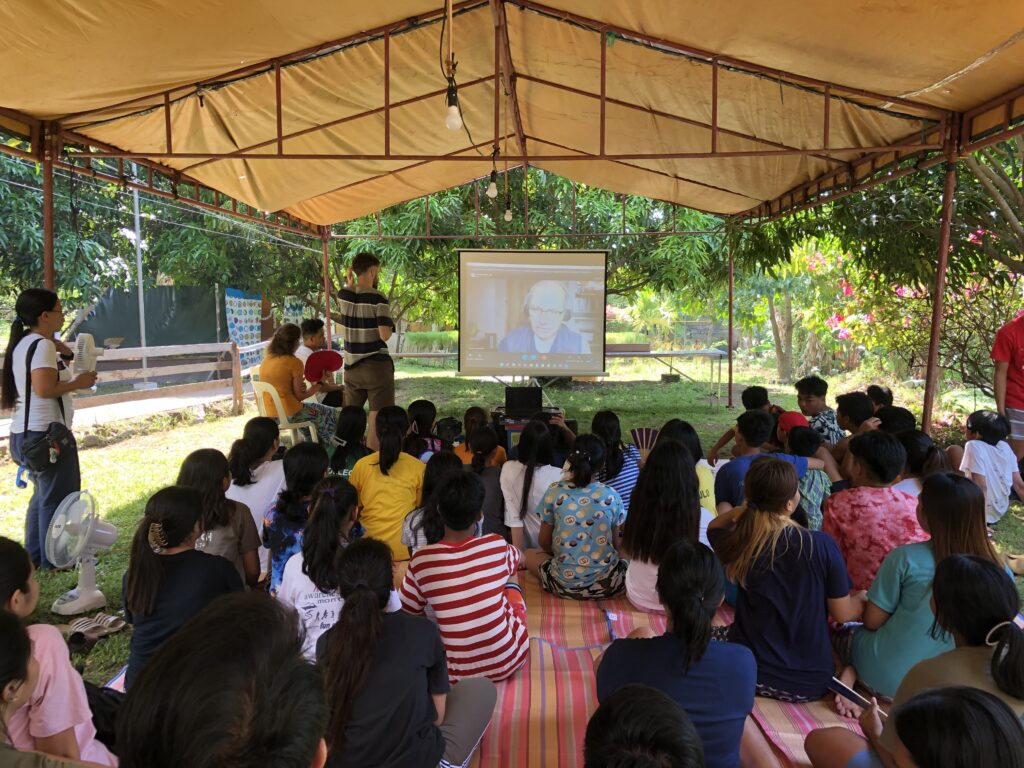 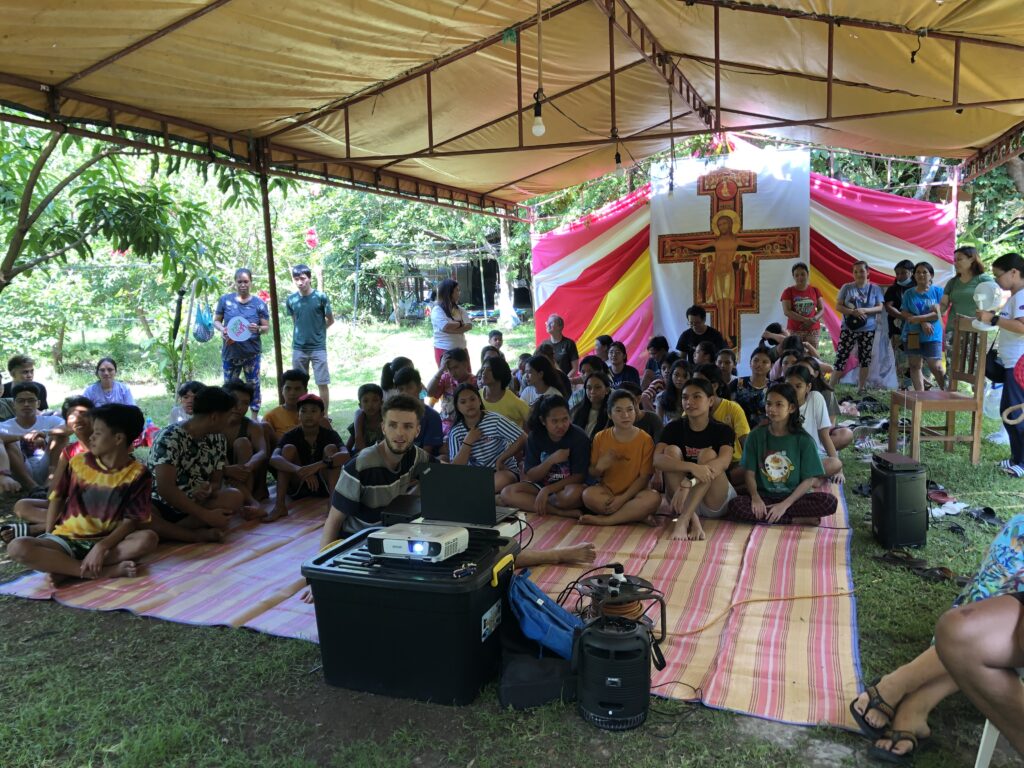 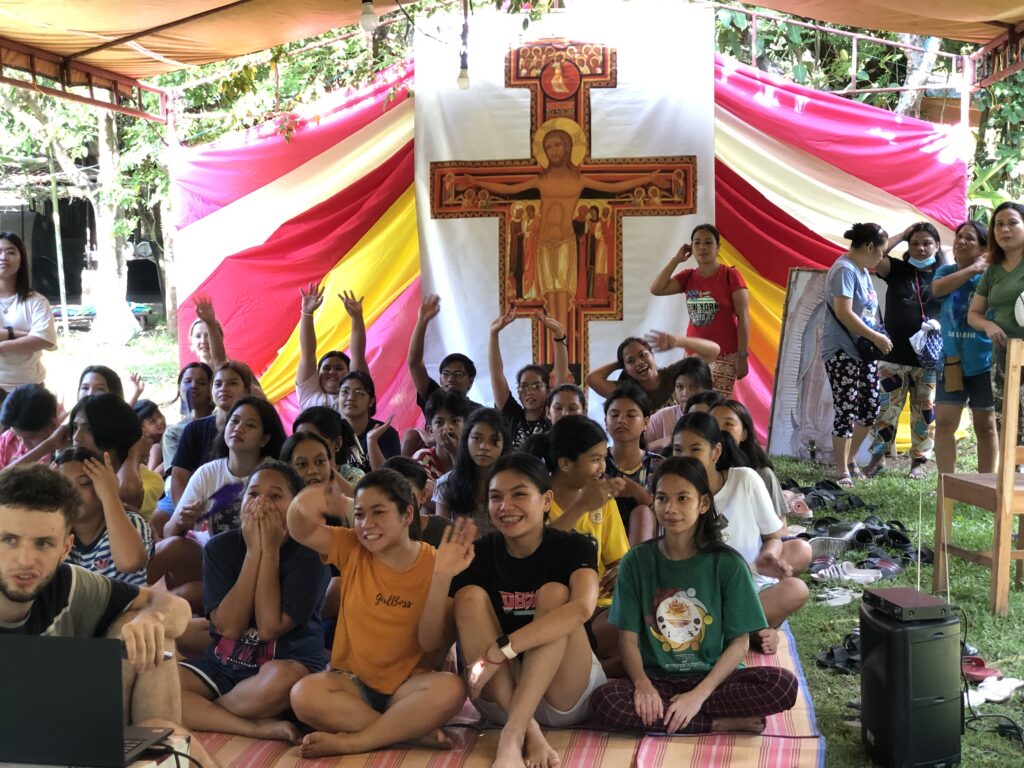